UIView bringSubviewToFront: does *not* bring view to front

I am implementing a simple iOS solitaire game that allows the user to drag the cards around in the usual way. The cards are represented with the UIView subclass CardView. All the card view's are siblings which are subviews of SolitaireView. The following snippet tries to "bring a card to the front" so that it is above all the other views as it is being dragged:

Unfortunately, the card's z-order remains unchanged during the drag. In the images below, I am dragging the King. Notice how it is correctly on top the Nine in the left image, but is incorrectly under the Two (under the entire stack actually) in the right image: 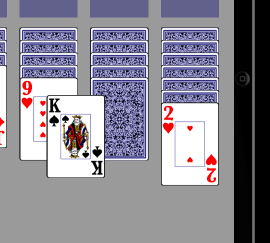 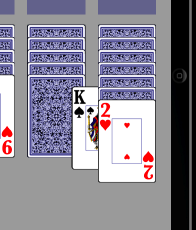 I also tried alter the layer.zPosition property as well to no avail. How can I bring the card view to the front during the drag? I am mystified.

2012-04-04 20:57
by wcochran
I discovered that bringSubviewToFront: triggers the view's 'needsLayout' flag to be set. My layoutSubviews method was also calling bringSubviewToFront: thus reverting all the view z-orders back to their initial state - wcochran 2012-04-04 22:13
Then whats the solution for this? I am also having same kind of requirements, where from list of cards, if i select any of the middle order card, it should come up, then come to the front. but my animation is not working because of bringSubviewToFront: metho - Mrunal 2013-03-21 14:25
If you stick with using UIView subclasses then you need to mark the card being dragged so that layoutSubviews can place it on top. I actually switched to using CALayers as mentioned below - wcochran 2013-03-22 15:11
Thanks for your reply. Can you please place the code for that - Mrunal 2013-03-22 15:39
A code snippet is listed below - wcochran 2013-03-23 18:29
@Mrunal Source code now at https://github.com/wcochran/solitaire-iO - wcochran 2017-07-01 14:31

Instead of using a UIView subclass, I created a CALayer subclass named CardLayer. I handle the touch in my KlondikeView subclass as listed below. topZPosition is an instance var that tracks the highest zPosition of all cards. Note that modifying the zPosition is usually animated -- I turn this off in the code below: