What is the need for normalizing a vector?

What is the need for normalizing a vector?

What do you actually get when you normalize it - I get the idea you have to divide x/|N| y/|N| & z/|N|. My question is, why do we do this thing, I mean what do we get out of this equation?

What is the meaning or 'inside' purpose of doing this.

A bit of a maths question, I apologize, but I am really not clear in this topic.

That's a bit like asking why we multiply numbers. It comes up all the time.

The Cartesian coordinate system that we use is an orthonormal basis (consists of vectors of length 1 that are orthogonal to each other, basis means that any vector can be represented by a unique combination of these vectors), when you want to rotate your basis (which occurs in video game mechanics when you look around) you use matrices whose rows and columns are orthonormal vectors.

As soon as you start playing around with matrices in linear algebra enough you will want orthonormal vectors. There are too many examples to just name them.

At the end of the day we don't need normalized vectors (in the same way as we don't need hamburgers, we could live without them, but who is going to?), but the similar pattern of v / |v| comes up so often that people decided to give it a name and a special notation (a ^ over a vector means it's a normalized vector) as a shortcut.

Normalized vectors (also known as unit vectors) are, basically, a fact of life.

It is easy to see that a normalized vector has length 1. This is because:

Any vector, when normalized, only changes its magnitude, not its direction. Also, every vector pointing in the same direction, gets normalized to the same vector (since magnitude and direction uniquely define a vector). Hence, unit vectors are extremely useful for providing directions.

Turns out, to define a vector in 3D space, we need some reference directions. These reference directions are canonically called i, j, k (or i, j, k with little caps on them - referred to as "i cap", "j cap" and "k cap"). Any vector we think of as V = (x, y, z) can actually then be written as V = xi + yj + zk. (Note: I will no longer call them by caps, I'll just call them i, j, k). i, j, and k are unit vectors in the X, Y and Z directions and they form a set of mutually orthogonal unit vectors. They are the basis of all Cartesian coordinate geometry.

There are other forms of coordinates (such as Cylindrical and Spherical coordinates), and while their coordinates are not as direct to understand as (x, y, z), they too are composed of a set of 3 mutually orthogonal unit vectors which form the basis into which 3 coordinates are multiplied to produce a vector.

So, the above discussion clearly says that we need unit vectors to define other vectors, but why should you care?

Because sometimes, only the magnitude matters. That's when you use a "regular" number (something like 4 or 1/3 or 3.141592653 - nope, for all you OCD freaks, I am NOT going to put Pi there - that shall stay a terminating decimal, just because I am evil incarnate). You would not want to thrown in a pesky direction, would you? I mean, does it really make sense to say that I want 4 kilograms of watermelons facing West? Unless you are some crazy fanatic, of course.

Other times, only the direction matters. You just don't care for the magnitude, or the magnitude just is too large to fathom (something like infinity, only that no one really knows what infinity really is - All Hail The Great Infinite, for He has Infinite Infinities... Sorry, got a bit carried away there). In such cases, we use normalization of vectors. For example, it doesn't mean anything to say that we have a line facing 4 km North. It makes more sense to say we have a line facing North. So what do you do then? You get rid of the 4 km. You destroy the magnitude. All you have remaining is the North (and Winter is Coming). Do this often enough, and you will have to give a name and notation to what you are doing. You can't just call it "ignoring the magnitude". That is too crass. You're a mathematician, and so you call it "normalization", and you give it the notation of the "cap" (probably because you wanted to go to a party instead of being stuck with vectors).

BTW, since I mentioned Cartesian coordinates, here's the obligatory XKCD: 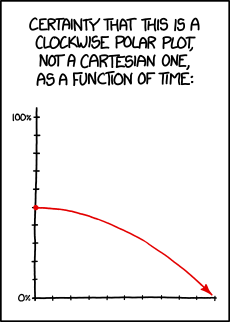 2015-07-11 18:17
by Jay Bosamiya
very helpfull. Gives the clear picture about importance of normalization - Aneer Anwar 2017-04-21 05:38
Much better than the accepted answer - Steven P. 2017-05-11 20:17
This is a very good explanation. In fact, I always love these kind of questions because it produces this kind of answer and some of the people here always explain the jargon on its own without explaining the 'why' on why its called. I am developer and get caught up by jargons (which I don't care at all), but sometimes there are some point where the reason on their naming matters to me more that what it does. For example (Intending vs Intended methods in Espresso unit test) and (map vs flatMap methods in reactive) - Neon Warge 2017-06-02 15:12

Ok, so we know what a vector is. It has a direction and a magnitude. We also know how to use them in Godot. The next step is learning about unit vectors. Any vector with magnitude of length 1 is considered a unit vector. In 2D, imagine drawing a circle of radius one. That circle contains all unit vectors in existence for 2 dimensions: 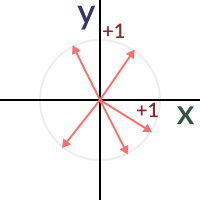 So, what is so special about unit vectors? Unit vectors are amazing. In other words, unit vectors have several, very useful properties.

Can’t wait to know more about the fantastic properties of unit vectors, but one step at a time. So, how is a unit vector created from a regular vector?

Taking any vector and reducing its magnitude to 1.0 while keeping its direction is called normalization. Normalization is performed by dividing the x and y (and z in 3D) components of a vector by its magnitude:

As you might have guessed, if the vector has magnitude 0 (meaning, it’s not a vector but the origin also called null vector), a division by zero occurs and the universe goes through a second big bang, except in reverse polarity and then back. As a result, humanity is safe but Godot will print an error. Remember! Vector(0,0) can’t be normalized!.

Of course, Vector2 and Vector3 already provide a method to do this:

OK, the dot product is the most important part of vector math. Without the dot product, Quake would have never been made. This is the most important section of the tutorial, so make sure to grasp it properly. Most people trying to understand vector math give up here because, despite how simple it is, they can’t make head or tails from it. Why? Here’s why, it’s because...

The dot product takes two vectors and returns a scalar:

I know, it’s totally meaningless! You can even do it with a built-in function:

The order of two vectors does not matter, a.dot(b) returns the same value as b.dot(a).

This is where despair begins and books and tutorials show you this formula:

And you realize it’s time to give up making 3D games or complex 2D games. How can something so simple be so complex? Someone else will have to make the next Zelda or Call of Duty. Top down RPGs don’t look so bad after all. Yeah I hear someone did pretty will with one of those on Steam...

So this is your moment, this is your time to shine. DO NOT GIVE UP! At this point, this tutorial will take a sharp turn and focus on what makes the dot product useful. This is, why it is useful. We will focus one by one in the use cases for the dot product, with real-life applications. No more formulas that don’t make any sense. Formulas will make sense once you learn what they are useful for.

The operation will return a single floating point number (but since we are in vector world, we call them scalar, will keep using that term from now on). This number will tell us the following:

So let’s think of a real use-case scenario. Imagine Snake is going through a forest, and then there is an enemy nearby. How can we quickly tell if the enemy has seen discovered Snake? In order to discover him, the enemy must be able to see Snake. Let’s say, then that: 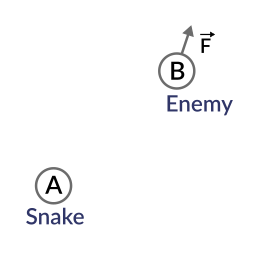 So, let’s create a new vector BA that goes from the guard (B) to Snake (A), by subtracting the two: 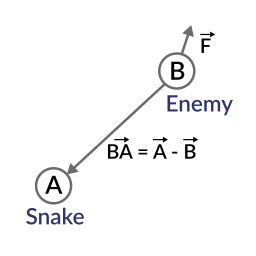 Ideally, if the guard was looking straight towards snake, to make eye to eye contact, it would do it in the same direction as vector BA.

If the dot product between F and BA is greater than 0, then Snake will be discovered. This happens because we will be able to tell that the guard is facing towards him:

Seems Snake is safe so far.

Siding with unit vectors Ok, so now we know that dot product between two vectors will let us know if they are looking towards the same side, opposite sides or are just perpendicular to each other.

This works the same with all vectors, no matter the magnitude so unit vectors are not the exception. However, using the same property with unit vectors yields an even more interesting result, as an extra property is added: 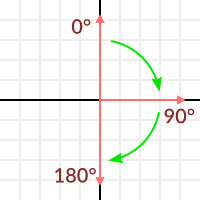 While plotting the resulting scalar!

Aha! It all makes sense now, this is a Cosine function!

What is this useful for? Well obtaining the angle directly is probably not as useful, but just being able to tell the angle is useful for reference. One example is in the Kinematic Character demo, when the character moves in a certain direction then we hit an object. How to tell if what we hit is the floor?

By comparing the normal of the collision point with a previously computed angle.

The beauty of this is that the same code works exactly the same and without modification in 3D. Vector math is, in a great deal, dimension-amount-independent, so adding or removing an axis only adds very little complexity.

You are making its length 1 - finding the unit vector that points in the same direction.

This is useful for various purposes, for example, if you take the dot product of a vector with a unit vector you have the length of the component of that vector in the direction of the unit vector.

The normals are supposed to be used as a direction vector only. They are used for lighting computation, which requires normalized normal vectors.

in machine learning and deep learning we need to normalize vector, because gradient descent converge fast